Take a bold (or baby) step out of your comfort zone 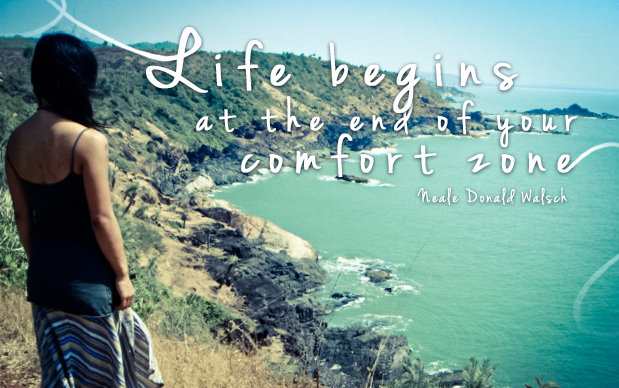 That’s me in Kerala, India circa 2008 (Photo credit: Shane Beresford)

The new year is well on it’s way. So I may be a little late in announcing that my New Year’s resolution was to continue to push myself out of my comfort zone. To honour my resolution, the first thing I did was run off to the Amazon jungle. Ok, so it was my third time in the Amazon, which would lead one to believe that being in the jungle is actually well within my comfort zone. But the truth is, being in the wilds of the Amazon never begins as a comfortable experience for me. See, I grew up in the city and my family wasn’t exactly the let’s-get-out-into-nature kind of family. And the Amazon jungle is Nature with a capital N. Nature unplugged. Raw and chaotic. Mosquitoes that never give you a break. Flying cockroaches the size of your hand. Outdoor latrines (a.k.a. hole in the ground) that sometimes verge on flooding. Extreme heat and humidity. No electricity. Bucket baths (because you can’t bathe in a lagoon filled with crocodiles, piranhas, electric eels, and anacondas). The strange unfamiliar noises at night. And so much more. But I survived. And not only did I survive. I thrived. I embraced the discomfort (and learned so much from it). I adapted to the environment. And eventually grew to love it (as always).

So running off to the jungle, along with all the myriad adventures that had in the past few years, might beg the question… Why? Why do I do such things? Why would I put myself through the discomfort? Especially given that I have a choice. The choice to be “comfortable” (whatever that means). Just like we all do. Why do I believe that putting myself in uncomfortable situations is a good idea? Well, for me, the answer is simple. Simple and incredibly important. Perspective. Expansion. Growth. Renewal.

What happens when you leave your comfort zone

Most of us don’t like to be uncomfortable. We avoid certain situations primarily to avoid the discomfort. But what if that discomfort is just all in our imagination. American physician and writer Oliver Wendell Holm said that “the mind, once stretched by a new idea, never regains its original dimensions”. I know this to be true from experience.

Imagine your “comfort zone” is the shape of a box. Maybe it’s a large box. Maybe it’s a small box. The space within the box is the space in which you allow yourself to move around. It’s your home. Your zone. You don’t normally leave the box. Because you don’t normally think about leaving the box. And when you do think about leaving the box, the idea doesn’t seem all that attractive. The thought of leaving makes you uncomfortable. Now consider for a moment drawing a circle around the box. Give yourself the permission to step outside the box and move towards the parameters of the circle. Walk around the new space. Look around. Things might look a little different. Smell a little different. Feel a little different. And you might be uncomfortable being somewhere so unfamiliar. But soon enough, you’ll find yourself forgetting about the former confines of the box. The circle has now become your comfort zone. And you can never go back to being inside the box.

Moving out of your comfort zone allows you to let go of and go beyond what you think you know. Into a space that was always there but never experienced by you. Until now. And now you know what it feels like and it isn’t that bad. In fact, you might even enjoy the new spaciousness. New things can seem difficult and unpleasant at first, but after a while you forget that you were uncomfortable about it at all. Your comfort zone changes. It expands. Going beyond your comfort zone can open up new opportunities and experiences you didn’t even know were possible.

It takes a lot of courage to release the familiar and seemingly secure, to embrace the new. But there is no real security in what is no longer meaningful. There is more security in the adventurous and exciting, for in movement there is life, and in change there is power. ~Alan Cohen

This is what I’ve discovered about my own comfort zone and the process I undergo when I force myself to move beyond it. Over the recent years, pushing myself  beyond the familiar has been a big part of my own personal undoing process – undoing all the patterns and behaviours that weren’t serving me any longer. I left a comfortable city to explore other cultures and ways of living that are vastly different from the one I was most familiar with, sometimes not speaking the language, always learning and gaining insight along the way. I discovered that this process almost always plays itself out in the same way:

At the moment, I’m trying to improve my visual art skills. And I have to say, once again, it’s uncomfortable. I’ve never been very good at drawing (stick figures are my specialty). And during my first few lessons, I’ve wanted to give up. It’s very frustrating for me not to be good at something straight away. My instinct is to quit rather than risk ridicule. But, I’m ignoring the cease and desist voice. And my circle continues to get larger around me. The tiny box I used to inhabit is but a distant memory. I have much more room to move now.

So you’re starting to feeling antsy, like your box is a little too small, and you need some ideas to get moving. Here are a few (all of which have been tested by me):